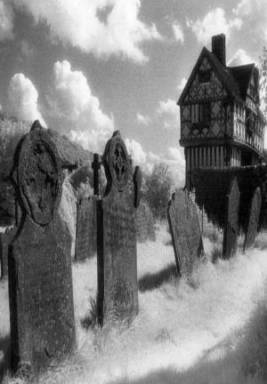 Percy Reilly became the Chief Groundskeeper and Gravedigger at the Cemetery outside the town of Resolution on his 20th birthday.

He moved into the Caretaker’s Cottage and turned it into a very respectable home in a short amount of time. One year after moving in he brought home a wife and they had a daughter they named Frieda.

Frieda’s childhood was spent in the cemetery among the stone angels and marble lambs and gray tombstones and it was probably best she had no desire to travel past the cemetery gates and down the road into the small town of Resolution because on
The day Frieda was born a terrible thing happened in the town of Resolution.

That was the day the small cemetery outside of the town’s only church was desecrated. The Pioneers Cemetery was ripped apart, graves plundered and dry brittle bones and shrouds and things long buried where scattered from one end of the grounds to the other.

That’s what happened the day Frieda was born and no one ever believed the two things weren’t connected.

And they were right.

In the following years in the town of Resolution the young people and some of the older residents, their resolve strengthened by alcohol or outright bullying on each others part would dare each other up into the hills of Resolution and to the Cemetery at the end of the aptly named Coffin Road.

The idea of the trip was to find the Gravedigger’s Daughter, who for the past 50 years still lived in the caretaker’s cottage.

If you could stand the voice that came from that throat and slithered into your ear you’d learn your future. She knew how you would die and if you could prevent it.  She could hear the whispers from the ghosts who walk among the living and sometimes she knew where all sorts of things had been hidden or buried.

And Frieda was never wrong.

All you had to do was look her in the eye as she tells you your fortune.

Another thing you had to be sure of was that you didn’t go mad just looking into that face; and the Asylum in the next town over held at least a dozen living former residents of Resolution who weren’t able to hold their own in the face of Frieda Reilly.

One day Baxter and Everett, two local boys, met Frieda just before sunset last November. They went up to the cemetery to find the Gravedigger’s Daughter to ask her
her to tell one of them their fortune.

They dared each other to see who could stare into her face and learn their own fates.

Everett took the bet and up to the cemetery they went.

All the way up into the hills Baxter reminded Everett the bet was off if he didn’t actually look into Frieda’s face when she answered. If he shut his eyes, screamed out or turned back that 100.00 bet was as good as spent in Town that night and Everett could just stand there and watch him spend it all.

On the way up to the Cemetery on Coffin road, they passed an abandoned farmhouse surrounded by a dead apple orchard, they cut through a field coated with dust and walked down into a ravine choked with plants they’d never seen anywhere around town.

The flowers were dry and brittle and the leaves gave off a sharp pungent odor. Maybe it was only a trick of the light but the small blossoms seemed to glow all on their own.

Then they found a set off steps carved from granite followed them up to an unused but well cared for path and then they were at the gates of the cemetery.

A child’s thin high voice traveled down to them and passed around them like a soft breeze and was gone.

The laughter came back and both men, without realizing it wiped their faces with the cuffs of their sleeves.

Everett wandered around the cemetery for a while.  In the setting sunlight he finally saw the Caretaker’s Cottage on a little Hill in the west corner of the graveyard surrounded by dead black trees and the skeletal remains of shrubs and bushes.

The door to the cottage swung open and a blast of stale dried air crawled out of that dark place and slid and twisted it’s way to Everett and wrapped itself around his legs and before it could crawl up to his face he brushed himself off and backed away from the house.

She was an ordinary little girl and Everett thought, Sunflowers. She reminds me of sunflowers. Who on earth would plant sunflowers up here?

” What do you want? ” that little girl said with a child’s voice in Everett’s ear, but in Everett’s mind the voice was old, old and corrupt and rotten.

Poor Everett was past the point where his mind was able to make sense out of anything anymore.

” Will you stay for awhile and keep me company? I get very lonely here. The dead are mad at me again and they won’t talk to me. Just because I hurt them…”

” Hurt them? ” Everett felt dizzy, his own voice sounded very far away and he was cold, so very cold. ” Why would you hurt the dead? ”

” Because I get hungry, ” the little Sunflower said. ” That’s all, I just get so hungry. ”

” I’ll give you something to eat, if you tell me where Frieda is. ”

And then Everett didn’t see Sunflowers he saw Frieda Reilly.

He saw the semblance of a six year old girl; he saw a twisted elfin face engulfed by milky green eyes with no pupils, her ears were pale and leathery and pointed and her mouth was too wide for her small face and full of sharp white teeth.

Frieda’s hair was bright and golden and glistened alive with it’s own warmth in the moonlight. Just like a sunflower.

” I’m here to learn my future Frieda Riley. ” he said in a whisper.

He did keep his promise. He held out his hand and then he was pulled down for a very long time and terrible pains crawled up his arm to his shoulder and then to his neck and then the darkness took him.
Baxter waited by the gate and when he was sure Everett had met his fate Baxter prepared to meet his fate…the fate he was destined to repeat until the day he died.

Baxter reached through the wrought iron fence and picked up a little cloth bag full of very old and valuable coins. He looked into the bag sadly and then started that long walk down into Resolution.