“E” Is For The Cosmic Egg 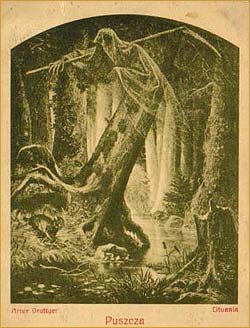 ” Revenge is a kind of wild justice “

In a town called Dunning a woman named Embelia Felonwood took her revenge on an entire town with an ax. She did it alone and she nearly chopped off her own foot and she did loose her hand, but she’s never complained about it.

You can ask her for yourself.

Go ahead and take Highway 64 out of Seattle and head straight into up into the Cascade Mountains. There’s lots of roads and old logging trails up there but you’ll want 64 and when the road disappears and you hit brick, keep going.

When the brick gives way to dirt look for the rail road tracks if you don’t follow the tracks you could end up in one of those little towns with a population of 15 and everyone looks the same and has too many fingers.

Go ahead and laugh, but the Cascade Mountains are full of those towns and don’t fool yourself into thinking that it was shallow gene pool that changed those people.

It was those things that lived in the trees from Felonwood

Embelia’s family lived in Felonwood Valley, now days that’s this dusty dried up scab of land that use to be full of trees  and it had a houses and a cemetery and a schoolhouse and a Saloon and even a train station to connect it to the rest of the bigger towns in the Cascades.

Only nobody ever got on the train in Felonwood and when the train for some reason had to stop there the conductor would more likely to pull the shades down in the windows and the passengers were likely to not lift them until they were far away from Felonwood.

All of those buildings were made of stone, and none of the buildings had windows and if anyone would have even gotten off of the train and tried to open one of those doors that led into those little gray buildings they would have found the doors were fake.

The little Mills and Farms up in the Cascades had  a pretty good life up in those Mountains but they did have one problem…time.

Which to their credit they managed until…well the more determined ones managed it till Tuesday, sometimes even Thursday. In fact it was on a Friday that someone from Dunning staggered off the train in Felonwood at Sunset.

His name was Jacob Olson and Dunning probably would have been a better place to live had Jacob never shown up in Dunning to begin with.

Jacob Olson didn’t exactly walk off the train into Felonwood on that Friday just before sunset. He was getting sick over the railing and when the train jerked and started back down the tracks he went over the side and landed face down in the dirt.

When he turned himself over he was looking up into a dark face framed by black hair and dominated by a set of  black eyes and teeth so white they almost glowed blue.

The woman drew in a breath before she spoke and Jacob wouldn’t have been at all surprised had she howled like dog and sprouted horns from her forehead.

Instead she looked down at him with the same look his wife had when their cat brought home half-chewed still alive mice and birds and dropped them in the middle of their kitchen floor.

” Wonderful ” she said, ” this is just wonderful.”

When Jacob tried to get up the woman put the heel of her boot into his neck and shook her head. ” Move and I’ll cut your heart out. I’ll bury it here, and trust me. You don’t want that.”

As the woman spoke the air chilled and Jacob didn’t care at all for the way here black eyes seemed to be seeing more then what was in front of her nose. ” We’re waiting here for the next train. You’re going to be on it. Give me your word you won’t come back and I’ll let you go.”

The Woman was good to her word and she did put Jacob on the train. However, anyone in Dunning could have told you what Jacob’s word was worth so it shouldn’t surprise you he was back 72 hours later and when he was done the ground of Felonwood was sown with salt.

Felonwood started to die after that, and I don’t mean the plants and the water and the animals.

Remember the things that lived in the trees of Felonwood that I told you about earlier?

These shadows and shades and half alive creatures use to have names and homes, some of them had even spent time in Dunning.

Anyway, they started to die and if any of them thought dieing the first time around would make it easier the second time around they were wrong.

After Jacob and his friends came into Felonwood, waving around their silver crosses and salt the residents of Felonwood started to get sick.

Then one evening a  Shade, it’s face and hands eaten away by the poisoned ground of Felonwood burst into flames at Embelia’s feet.

Embelia did something she had never done before.

She ran from tree to tree screaming up into the darkness that always hung above the trees of Felonwood “Stay in there, do you hear me? Stay in there and don’t come out until I say it’s okay!”

Then Embelia  went into her cabin and came out with an ax she looked back up into the trees and yelled ” Hang on! ”

She whistled the entire time she worked.

Months later something came down from Felonwood on the flatbed, the last car on the train that ran the Cascade Loop.

The ‘something’ was nothing unusual. On the flatbed were logs…lots and lots of logs.

Being that Dunning was a lumber town, they did what they were supposed to do.

They cut and processed the lumber and most of it ended up staying right there in the town.

They used the logs in the new houses they were putting up; they used it in the little hospital and the new Church as well as for the additions to the lumber mill.

Like people saying they were hearing voices in the Church, horrible voices telling them to do horrible things. Children would come home from school and insist that they were seeing faces in the floors and on their desk tops and at the hospital, well, they couldn’t keep staff there either because the Doctor and nurses were spreading stories around town about how patients who died there at the hospital seemed to be coming back.

And they were dieing over and over again.

Those stories weren’t as bad as the ones about people claiming to see the Malloy Sisters walking down Main Street-the same Malloy Sisters who were hung for Witchcraft and who all strangled slowly because the hangman wasn’t exactly  a professional and the Sister’s necks didn’t snap the way they were suppose to.

Then Mr Mayer said he was positive he had seen Marcus Spurges at the Library walking up and down the aisles arm and arm with his wife and whispering into her ear.

Mr Mayer was very surprised to see the both of them there in the Library because Mr and Mrs Spurges were both executed shortly after the Malloys for, big surprise…witchcraft.

The Spurges, The Malloys, a man named Simon who had been accused of Werewolfery. All accused, all imprisoned, all executed by hanging and all buried up the road in a little town called Felonwood.

Lots of people were left wondering why these Ghosts should be coming to Dunning of all places, how of all the towns in the Cascades they chose this one to return to.

Wondering was enough to drive you crazy and it did there in Dunning. Dunning was destined to never win any Mental Health Awards.

So before you go over the edge with the rest of the residents of Dunning, if you’re really that curious go ahead and talk to Embelia Felonwood- if anyone knows how that town fell apart and why she does.

But do me a favor.

She hand carves these little figures, animals and people and such from the trees that grow on her property.

Buy one from her.