We live on a very dangerous road.

So if someone isn’t jumping the curb with their monster sized SUV they’re almost hitting a kid or more likely running over someone’s cat or dog.

At the beginning of Summer I was outside getting my mail when my cat Blitzer sees me from across the street. He meows and bolts and just as before he gets to the middle of the street this car comes up the road and I’ll be darned.

He has plenty of time to stop I think.

I hear the engine rev up and this guy drives straight towards my cat.

Then when the driver sees me he slams on his breaks and pulls up to the curb and he looks embarrassed as he calls out the window, “Hey is that cat okay?”

I’m standing there thinking- what can I say?

And then I remember, I write stories at Owl Creek Bridge.I write about Devils and Demons, Witches and Curses and Psychos. I write about people who hide bodies in trunks with Christmas tree ornaments. I don’t know where the ideas come from I just know the inspiration for them can hit at the funniest times- and I’ve taught myself that when they do to pay attention.

“That cat….the black one that ran in front of my car. Is it okay?”

I back up from the car and look over my shoulder at my house. “Cat?”

He points up towards my Cherry tree and says. “That cat. Is it okay?”

I look under my Cherry tree and Blitzer is sitting there with his tail sort of swishing from left to right and he’s got these bright yellow eyes that (thank you Jesus!) are glowing like crazy because of the way the sunlight is hitting them.

Then I back up and hit my mailbox and without turning away from the guy in the car start yelling for my Husband who isn’t at home, “Luis! Can you come here for a minute? “

“Lady that cat! The one sitting under the tree right behind you!”

I turn around and look at Blitzer who is licking his chops because its dinner time and I look back at the guy in the car and say, “Look, just go okay? This isn’t funny.”

This guy looks from me to Blitzer and then he reaches down and tries to start his car which was already running and then he drives away but before he reaches the end of the street I see him stop, he pulls over and he sits there for awhile before he drives off again.

I turn around and Blitzer has a bird wing in his mouth.I guess he had it stashed under the tree, or maybe he had it the entire time.

I’m still not sure about that.

See, Blitzer is always dragging around parts of animals or chasing something through the bushes. He also has these nightmares and starts doing that weird cat scream when he’s all curled up at the foot of my bed.

Blitzer is sort of bonkers. My husband thinks we should see if they make anti-psychotic meds for cats.

Blitzer walks up to me and drops the wing at my feet and starts to purr.

I don’t know where he gets it from. 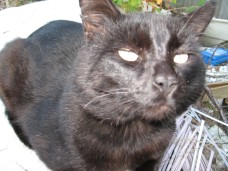