These articles are sent to me by friends, family and readers.

Now most people get funny jokes via e-mail or funny cartoons…this is what I get. But if it’s the thought that counts, I’d have to say all of these people in my life are pretty darn thoughtful.

From The Rise and Fall Of The Choctaw Republic by Angie Debo, pages 4 and 5, Copyright © 1934, 1961 by the University of Oklahoma Press. 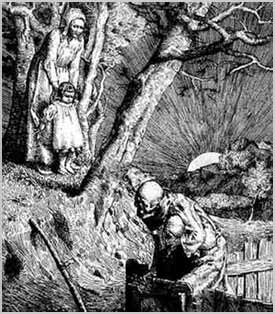 The fundamental character of the belief in immortality is shown by its appearance in the burial customs, the most curious and the most distinctive of all Choctaw ceremonials. When a member of the tribe died, the body was covered with skins and bark and placed upon an elevated platform which was erected near the house for that purpose. Even if the death had occurred far from home, the body was carefully brought back and placed near the house.

Beside the corpse were placed food and drink, a change of clothing, and favorite utensils and ornaments which would be needed by the spirit in its long journey to the other world. A dog was killed to provide the deceased with a companion, and after the introduction of horses, ponies were also sacrificed so that the spirit might ride.

For the first few days a fire was kept constantly burning to furnish light and warmth for the journey.

The body remained upon the scaffold for a fixed period, which, however, seems to have varied from one to four or even six months according to local custom. During this time the relatives frequently resorted to the foot of the platform to wail and mourn, although in warm weather the stench from the decomposing body became so intolerable that the women sometimes fainted while performing this respect to the deceased.

Among the honored officials of the Choctaws were men – and possibly women – who were known as bonepickers. These undertakers were tattooed in a distinctive manner, and allowed their fingernails to grow long for their revolting occupation. When the body had remained upon the scaffold the specified time, a bone-picker was summoned, and all the relatives and friends were invited for the last rites.

These mourners surrounded the scaffold, wailing and weeping, while the grisly undertaker ascended the platform, and with his long finger nails thoroughly cleaned the bones of the putrefied flesh.

The bones were then passed down to the waiting relatives, the skull was painted with vermilion, and they were carefully placed in a coffin curiously constructed of such materials as bark and cane. The flesh was left on the platform, which was set on fire; or was carried away and buried.

The hamper of bones was borne with much ceremonial wailing to the village bone house, a rude structure built on poles and surrounded by a palisade. There it was placed in a row with other coffins, and the mourners returned to the house, where all participated in a feast over which the bone-picker presided (without having washed his hands, as shocked white observers were wont to state).

Apparently it was the custom at stated intervals once or twice a year, to hold a mourning ceremony at which the entire settlement participated. The hampers of bones were all removed at this time, but they were returned at the close of the ceremony. When the charnel house became full, the bones were buried; sometimes the earth was placed over it to form a mound, and sometimes the bones of several villages were carried out and placed in one heap and covered with soil. This custom accounts for the burial mound at Nanih Waiya and for the many smaller mounds that form such a distinctive feature of the old Choctaw country.

From The Rise and Fall Of The Choctaw Republic by Angie Debo, pages 4 and 5, Copyright © 1934, 1961 by the University of Oklahoma Press.