I have never been afraid of going off road and exploring

I’ve gone into places with just a flashlight

and when I carried one I would leave my phone in the car.

The only thing I was afraid of was getting bugs in my hair.

I really hated it when that happened.

One day I found this empty house

and I had a great time poking around in there

and for some reason I sat there

on a dusty dirty floor

in what used to be the living room

Anything could have happened here…

Someone could have proposed marriage right on this spot

or somebody could have stood right here and been told that

all of that could have happened right here in this small space where I was standing in this house nobody had lived in for years.

These were random thoughts about normal,  familiar and safe things that happen to us all in life- which was funny considering where they had come to me.

But when I left, as I walked down the walkway to the path that would take me to my car I saw a shovel leaning against a doorway that led down into a root cellar.

I became painfully aware of the fact that the Sun would be setting soon.

I ran all the way to my car.

I have followed trails

and ridden on old logging roads

on horseback and by motorcycle.

which always smelled like rotten leaves and wet dirt

and completely silent the next.

and in the pictures that have been taken I am never smiling.

My mouth is always set in a hard straight line

I am grimacing in every single shot spanning over  30 years.

Today I thought about the Rivers and Streams, the Creeks I have explored and when I tried to picture one-

any one of the many I have been too

the only image that came to me

gently moving the black laughing water from side to side

It’s one of those weird things

It’s Scary how that happens.

From the Continuing Adventures of Milo and Jingle

They were a husband and a wife on their Honeymoon  and they were in a museum looking at one of a hundred mummies .

The mummy that Jingle and Milo  were looking was in it’s sarcophagus, the lid was off and the mummy and it’s coffin were  standing upright encased in a glass case.

A the mummy’s feet was the story about the nameless princess- dead for thousands of years now-  with the back of her skull missing.

Was it a murder?

Was it an accident during the embalming process?

Who buried the Princess, whose hands were also missing,below the floor of a tomb belonging to the many dogs once owned by the Pharaoh

Jingle looked into the face of the long dead woman and snickered-she did not laugh, she did not chuckle…she snickered

and when she realized her husband was watching her she blushed- just a little,

cleared her throat a tiny bit-

and then she tried,

to saunter away like all of the rest of the Musuem Vistors who were just looking around on that July afternoon.

And Jingle said to Milo as she disappeared comfortably into the rows of the dead.

” When some people tell you hands off …they mean it Milo. “

Back in the early 70’s I used to watch Cliff Hangers before I left for school in the morning.

I used to watch Flash Gordon

and a few others, but Flash was my favorite.

but that can change. 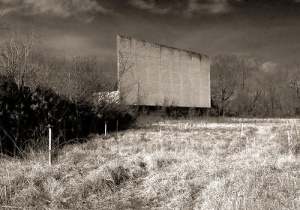 A long time ago a young man named Milo Hungerford asked a woman named Jingle to marry him at the Rainbow Beach Drive-In during intermission.

Jingle  said yes just as an army of little popcorn boxes went dancing across the screen  and a soft drink cup wearing a top hat stood on a box of Honey Bits  and invited you to visit all of his friends at the snack bar soon.

” I want to be with you forever. ” Milo told Jingle with tears in his eyes.

Then Milo took Jingle’s hand and put a ring on her finger that he had made for her himself.

In every town there are many roads that lead

schools and churches and homes and stores.

In every town those many roads

with names and numbers to mark their place on maps in books and printed within hastily folded booklets lost under car-seats and in stuffed into backpacks and glove compartments and desk drawers.

And if you are curious

with the sunset falling in their eyes

there is only one road

that goes to these places