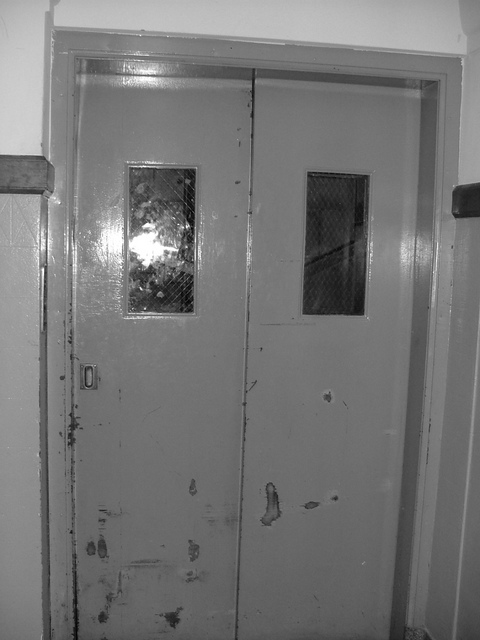 A few days ago someone sent this to me-

it’s one of those Urban Legend stories about a ghost

that shows up on a security camera.

It made me think because

I have an elevator ghost story.

We have an old freight elevator at work

and the repair men who run the inspections- and its always a different inspection team from year to year- tell the same story about a building just two streets over from where I work.

This is a story ( it’s just a story I’m sure ) about a woman who was murdered on a service elevator that wasn’t used very often (she was moving boxes from her apartment to the basement ) over a holiday weekend and her corpse rode that elevator for three days.

Her remains were discovered after the long weekend was over when someone in the building complained about the service elevator running up and down all night long without stopping.

Nobody could get the elevator to stop and apparently the people in the building had a hard time finding a service crew to come in because of the holiday weekend.

So everyone had to listen to those gears and that motor humming and hissing and running up and down on that last night.

Finally the repair crew made it in and when they finally got the elevator  stopped they were able to open the doors there she was.

Her neck was broken and her eyes and mouth had been sewn shut.

That was done, I learned before her neck had been snapped.

The elevator always had problems after that and no matter what they did they couldn’t fix it, so eventually the elevator was taken out and the shaft was turned into a staircase.

And sometimes, the people in the building say you can hear clicks and hums all night long coming from the stairwell.

So this story may just be an Urban Legend, like this video.

But the fact is as a writer I know that stories, all stories, were inspired by something or somebody

that was alive and real

5 thoughts on “The Elevator Ghost”